marisks # code
For several years using ASP.NET MVC we tend to organize our code by Models, Controllers, and Views. In EPiServer development, we also split it more - into Page types, View models, and other types. But lately, developers started to realize that it is hard to manage such codebase and started to organize the code by features. In this article, I will analyze both approaches using Dependency Structure Matrix.

ASP.NET MVC and EPiServer CMS Visual Studio templates by default split the code into Models, Views, Controllers folders and it leads most of the developers to use this style of code structuring. I'll call this approach as Tech folders. But there are other ways available.

Another approach is Feature folders. There are quite a lot of articles which describes it:

Further, I am going to show analysis of dependencies between components in both approaches. I created two EPiServer Alloy Tech sites where the first one is left untouched, but the second one is refactored into Feature folders.

For analysis, I used Dependency Structure Matrix and used the evaluation version of NDepend to create it. Below is a sample matrix. 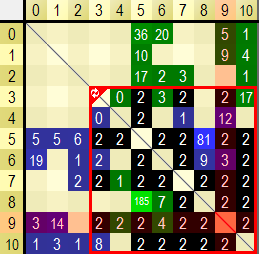 First let's look at a higher level - dependencies between namespaces.

Below is a Feature folders' namespace dependency matrix. 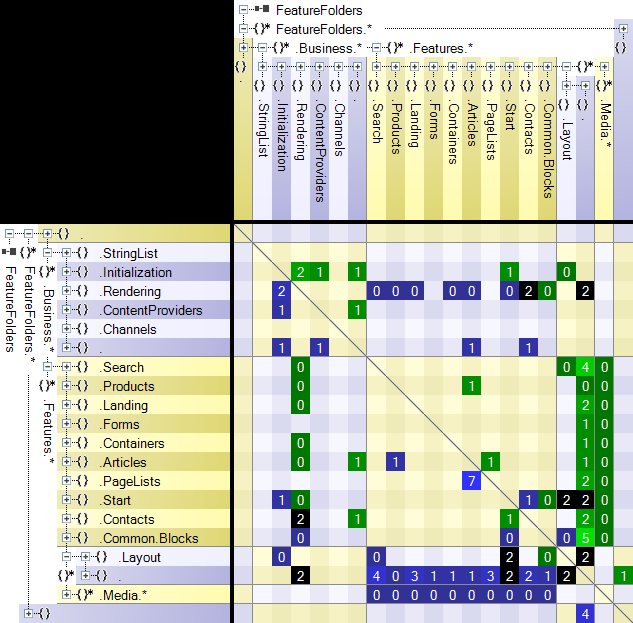 It is also visible that Business, Base, Layout, and Media are used by all features. There are few cyclic dependencies (in black). One is the shared layout and IPageViewModel used in Alloy Tech. I wrote about it before. And second is template render which defines custom views for some models. 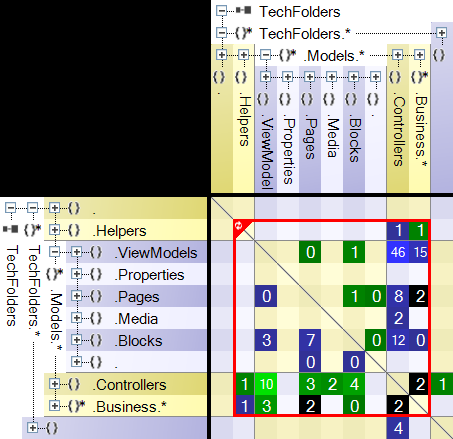 While dependency matrix seems simpler, it shows heavy coupling between namespaces. From this view, it is possible to see that Controllers and Business are heavily dependent on Models. It is impossible to see which application's feature is dependent on other feature. But you can see that Models has Layered code structuring. Unfortunately Controllers and Business namespaces are not. Also, Tech folders have cyclic dependencies for same reasons as Feature folders have. 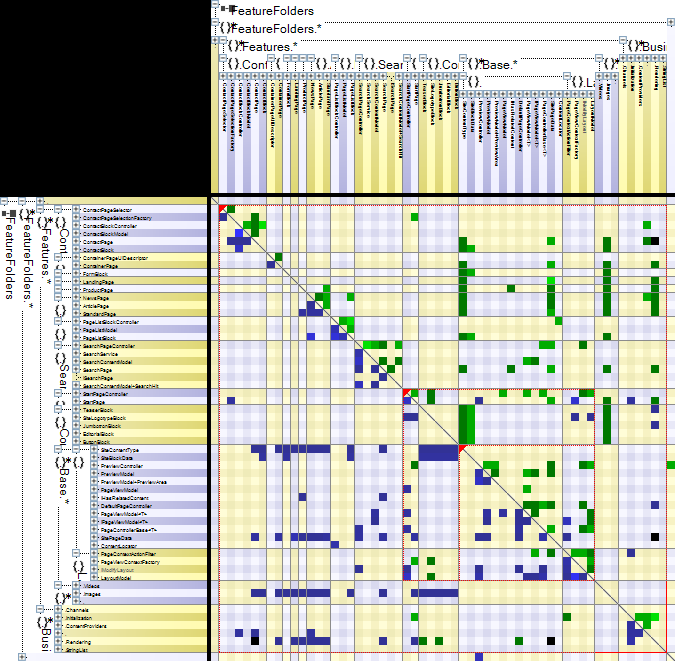 Also, here it is easy to see that features within Features namespace are quite independent - most of the dependencies are within namespace itself. You can spot those dependencies as squares on the diagonal. This matches code structure pattern - High Cohesion - Low Coupling. As we know our applications should tend to have high cohesion and low coupling.

Unfortunately, Tech folders do not have such pattern. 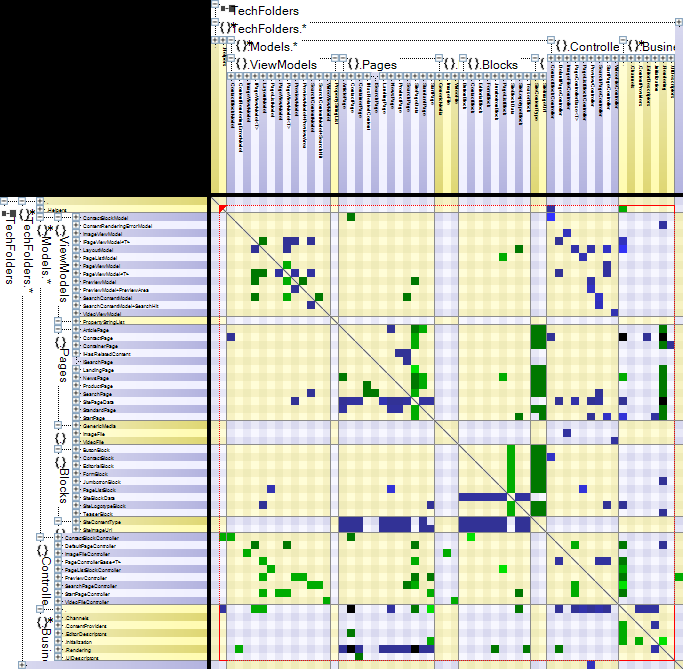 From this matrix, you can see that dependencies for a particular feature are spread over different namespaces. This matrix also shows that Tech folders are quite badly layered. In the layered structure most of the blue cells should be in the lower left triangle but green ones in the upper-right triangle. Feature folders have better-layered structuring.

From this Feature folder and Tech folder comparison, it is quite easy to understand the benefits of Feature folders and why Tech folders should be used only for demos or application prototypes. Feature folders provide lower coupling same time grouping related code together. The only disadvantage using Feature folders is that frameworks do not "understand" those by default - you might need to configure those for your needs.